Next week in Bristol, UK, the South West Creative Technology Network Immersion Showcase (SWCTN) will bring together eight tech pioneers to display the future of immersive technology. Of these eight prototypes, two will use virtual reality (VR) while another will utilise augmented reality (AR).

The first of these comes from Triangular Pixels – the team behind Unseen Diplomacy and Smash Hit Plunder – in the form of  Responsive Content Generation Tools. This suite of tools is designed to make VR content faster and more efficient to make, whilst also allowing VR players to adapt content to their individual needs. This is especially useful for VR gamers with disabilities, allowing videogames to adapt to users rather than the other way around. For the showcase Triangular Pixels will be demoing content created by the tools, allowing visitors to see how the software adapts to the space its played in.

Then there’s the Realtime Stagemaker Toolkit from Anagram. This prototype project is actually two components. Starting with the Realtime Stagemaker Toolkit, a Unity plug-in, the software allows for the real-time manipulation of assets by the entire team. Followed by an artistic VR experience called The End is the Beginning, produced in collaboration with the Freud Museum, where participants lie on a virtual version of Freud’s couch.

“Immersion is a slippery process. Right now its one of those creative ideas that means different things to everyone. And that’s just great, because it’s a space full of possibility,” said Jon Dovey, SWCTN Project Director, in a statement. “I can see two strands at work. One is about a complete whole-body experience of being surrounded by content in, for instance, immersive theatre, art installations, and dance floors; the other where these kinds of wraparound sensory experience are industrially re-constituted through various forms of technology – notably virtual reality, but also augmented and mixed realities.” 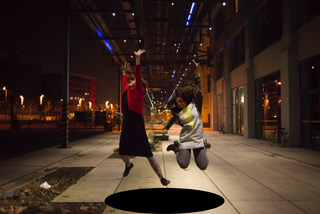 “The basic design principle for our immersion theme has been that the industrial and creative development of the newly emergent platforms might be driven by talent with expertise in existing forms of immersion,” he continues. “We wanted to know how storytellers, theatre, filmmakers and artists might work with technologists to keep the field of immersion open and fresh; not stuck forever into a sweaty box attached to the front of your head.”

As for the AR prototype, this is the work of VIKA Books. Called Baby BSL: Where is the Bird?, this project is an AR book combining illustrations, videos, print and smartphone tech to inspire families to use British Sign Language (BSL).

The SWCTN Immersive Showcase takes place on 12th July 2019, at the Watershed in Bristol. For any further updates keep reading VRFocus.