Ancient legends have always been a good source of inspiration for videogame developers and this month will see two virtual reality (VR) titles take different approaches. This week has seen the arrival of Asgard’s Wrath which utilises Norse mythology, and then later this month Mantis Games will release Journey for Elysium based on Greek mythology. 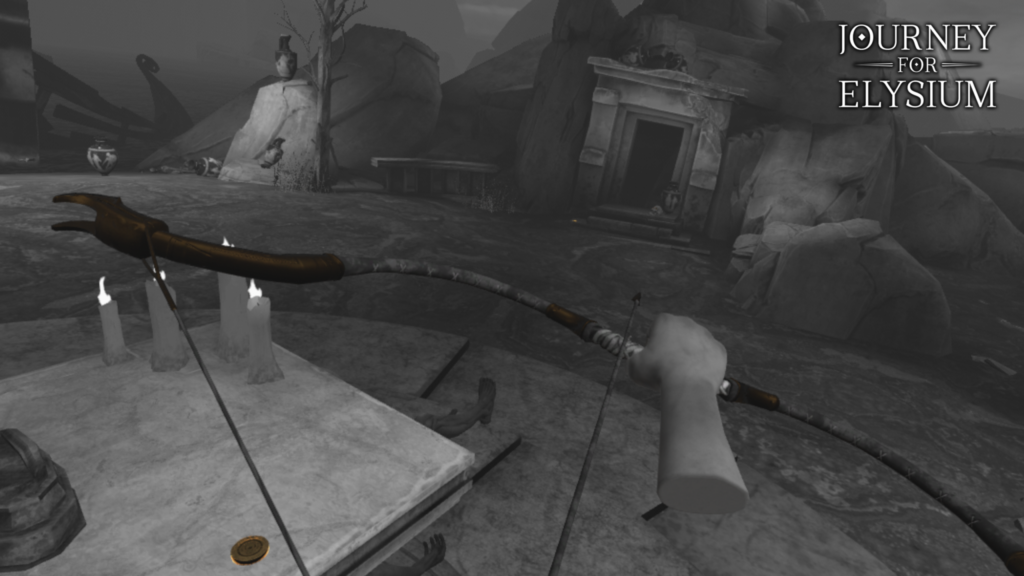 VRFocus originally came across the title during Gamescom 2018, previewing one of the early levels. Players take the role of an unnamed hero who has died and finds themself in the underworld, trapped. With a distinctive black and white visual style, players are tasked with solving elaborate puzzles on their quest to reach Elysium and attain redemption.

Players travel through the underworld by boat, across the river Styx. This forms an essential part of the videogames’ core gameplay and comfort mechanics. Players need to row down the river to each new location, thus providing a form of transportation that should be suitable for most people to easily grasp as well as reducing any nausea. Once on land then traditional VR movement mechanics will then apply depending on the settings selected.

The B&W art style isn’t purely for visual effect as it also plays a role in the various interactive elements. Noticeable in the screenshots and trailers, Journey for Elysium contains various golden elements indicating they have some use. These not only help players complete puzzles and unlock new areas but also uncover more of the narrative, learning about the protagonist’s enigmatic and shrouded past.

Compatible with Oculus Rift/Rift S and HTC Vive, Journey for Elysium will be available through Steam, Oculus Store and Viveport on 31st October 2019, retailing for $19.99 USD / €19.99 EUR / £17.99 GBP. On Steam, there will be a limited time 15 percent discount, lasting for one week.

Some players were able to test Journey for Elysium earlier this month thanks to Mantis Games granting access to a 10-minute demo to collect feedback. In addition to the two headsets supported at launch, the studio has previously mentioned plans to bring the experience to Windows Mixed Reality and PlayStation VR in the future. VRFocus will continue its coverage of Journey for Elysium, reporting back with further updates.