Everyone is trying to do their bit to help during this coronavirus pandemic, from looking out for neighbours and those who are more vulnerable to companies providing their services for free where possible. And as schools are currently closed an important part of this process is helping children continue to learning. So Schell Games, the studio behind virtual reality (VR) titles like Until You Fall and I Expect You to Die has announced its participation in the World Health Organization’s (WHO) #PlayApartTogether initiative.

As part of the campaign Schell Games is currently offering three of its educational videogames for free, Water Bears, Water Bears VR and HoloLAB Champions.

Released back in 2016, Water Bears VR is a puzzle title where players have to redirect,  reroute and remix water flows to help save the bears. With a selection of pipes to manipulate the water flow, Water Bear VR is a colourful and fun title for any age, with the videogame supporting Valve Index and HTC Vive headsets. VRFocus gave Water Bears VR a solid four stars in its original review, finding that the experience was good quality if a little short. And for those without a VR headset, there’s always the original Water Bears for mobile devices.

HoloLAB Champions is a very different beast and geared much more towards providing an educational experience. Designed around a game show format, HoloLAB Champions helps to teach you basic chemistry in two stages,  Chemiluminescence and Identify Unknowns. The former teaches students to mix correct amounts of liquid and solid ingredients to create a glowing chemical solution while the latter requires players to correctly identify several substances with minimal information. 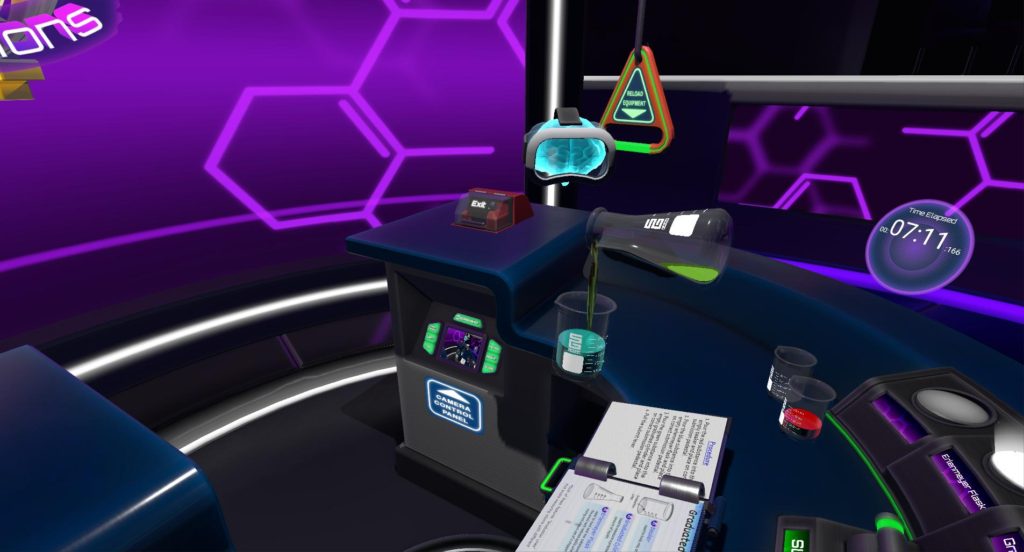 VRFocus reviewed HoloLAB Champions back in 2018 giving it four stars saying: “As a normal piece of VR content  HoloLAB Champions is short but sweet, offering an informative introduction into the world of chemistry. As a teaching tool it’s quite easy to see how VR has a place within education.”

If you’re looking for other educational VR offerings then there’s Seek Education, an augmented reality (AR) app designed for teachers or VictoryXR which is providing educational content through the ENGAGE platform. For further updates on educational VR/AR content, keep reading VRFocus.